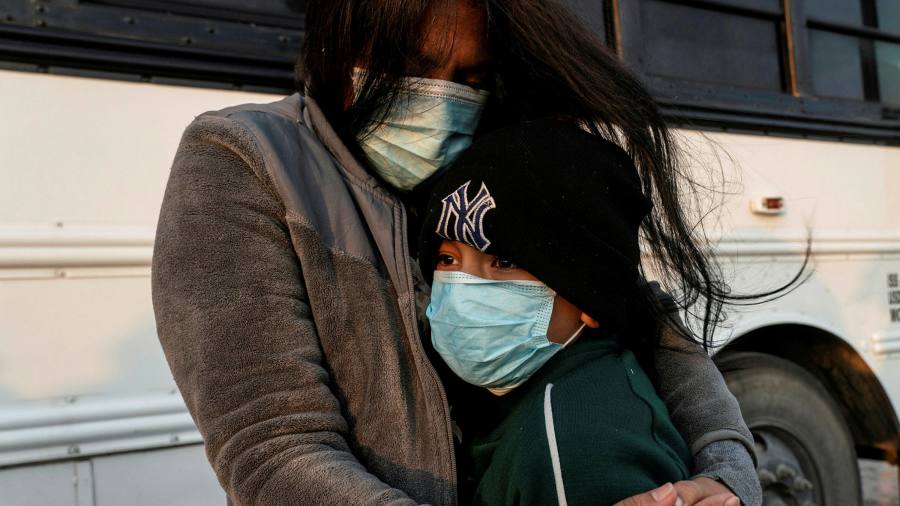 US authorities picked up almost 19,000 unaccompanied children at the south-west border in March, the highest monthly number on record.

The new figures from the US Customs and Border Protection agency put further pressure on President Joe Biden to humanely contain and process the growing number of child migrants as he rolls back many of Donald Trump’s hardline immigration policies.

CBP earlier this month said more than 172,000 people were encountered at the US-Mexico border in March. That includes almost 18,890 unaccompanied children, well above the previous high of 11,475 in May 2019.

The growing number of unaccompanied children crossing the southern border has left the US scrambling to find adequate holding facilities, leading to the reactivation of contentious temporary facilities run by CBP.

Pictures of the centres, which hold the children before transferring them to the custody of the US Department of Health and Human Services, have shown them sleeping on the floor in close quarters, despite the risks of Covid-19 transmission.

We are willing to join forces in the fight against human trafficking and to protect human rights, especially of children

Republicans have blamed the Biden administration for encouraging migrants to make the dangerous journey north by undoing some of its predecessor’s hardline policies.

The figures on Wednesday further fuelled their criticism, with Ted Cruz, a Republican senator from Texas, calling the increase a “reminder that the crisis at the border is a direct result of Joe Biden’s failed policies”.

The White House has said it was working to fix a broken immigration system left behind by the Trump administration.

While the Biden administration has repeatedly emphasised that the US southern border remains closed, it suspended a Trump-era public health rule that allowed the immediate expulsion of unaccompanied minors. It has continued expelling other migrants, however.

Last month Biden put Kamala Harris, vice-president, in charge of US efforts to stop the flow of migrants from Central America over the southern border. Many of the people seeking to cross the border are fleeing poverty, violence and corruption in countries such as Guatemala, Honduras and El Salvador.

The US also sent three senior diplomats to Mexico last month to work on developing “an effective and humane plan of action to manage migration”, according to the White House’s National Security Council.

The administration has also dispatched the federal disaster agency to help manage the thousands of children and teenagers held in detention facilities and shelters. 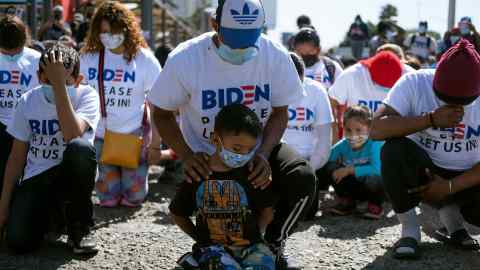 Images shared on social media of a young child walking alone in the desert in Texas, sobbing and recounting how he had been travelling with a group but had been “dumped alone”, brought home the dramatic situation as the US confirmed the increase in apprehensions of minors.

“Can you help me?” sobbed the distraught child, wearing an anorak in a video. “I was coming with a group of people and they dumped me and I don’t know where they are,” he said in Spanish.

According to media reports, the images were recorded by a US border patrol officer on April 1.

In a telephone call with Harris on Wednesday, Mexican president Andrés Manuel López Obrador stressed the need to protect migrant children from human traffickers. “We are willing to join forces in the fight against human trafficking and to protect human rights, especially of children,” he tweeted.

However, he did not say how authorities planned to provide “appropriate” protection for unaccompanied minors.

López Obrador said on Thursday he and Harris would speak “periodically, to evaluate how we are doing” on the subject of migration.

After a historic 2020 election, stay on top of the biggest themes driving US politics, business and markets from Washington, New York and beyond with Rana Foroohar and Edward Luce. Sign up here

DANGEROUS: MSNBC’S Johnson Claims Cops Are as Bad as Criminals, Shouldn’t Be Armed

Katy Perry Explains Why She Made a “Conscious Decision” to Have a Baby Now – E! Online

Today Dave Aldrich - April 14, 2021 0
Thousands scramble to get the last trains, buses and ferries before a nationwide transport shutdown takes hold.Tens of thousands of people have scrambled to...

DANGEROUS: MSNBC’S Johnson Claims Cops Are as Bad as Criminals, Shouldn’t Be Armed

Politics Dave Aldrich - April 14, 2021 0
On Monday's The 11th Hour show, MSNBC contributor Jason Johnson went into an anti-police rant in which he called for law enforcement in the...