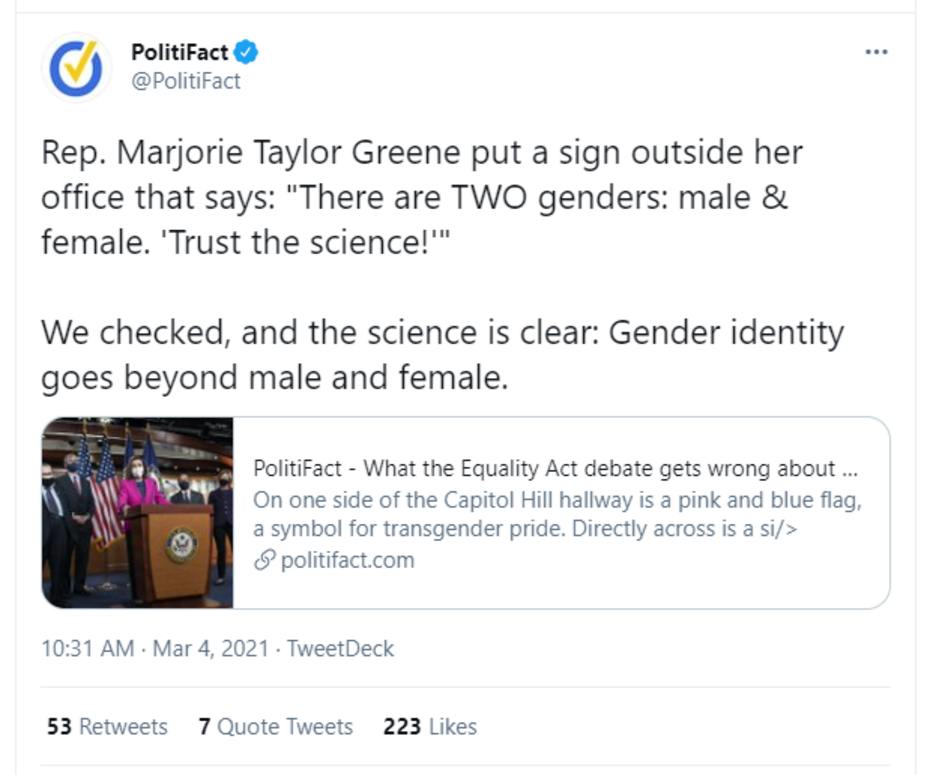 You can tell a “fact checker” is marching to the drumbeat of the libertine left when they labor to deny the biological fact that the overwhelming majority of humans are born as either boys or girls.

On Thursday, PolitiFact took sides in the hallway Twitter battle between freshmen congresswomen Marie Newman and Marjorie Taylor Greene over the so-called “Equality Act” being debated. “We checked, and the science is clear: Gender identity goes beyond male and female.”

How can you trust any “fact check” from people who are this slippery with obvious facts? On Thursday, PolitiFact wasn’t subtle by illustrating their “check” with a picture of left-wing activists holding up a sign reading “TRANS EQUALITY NOW.”

Daniel Funke and Miriam Valverde spared Rep. Greene one of those “False” ratings on the Truth-O-Meter, but they took the typical approach of finding liberal “experts” to add some kind of pseudo-facticity to their gender-deconstructionist arguments: 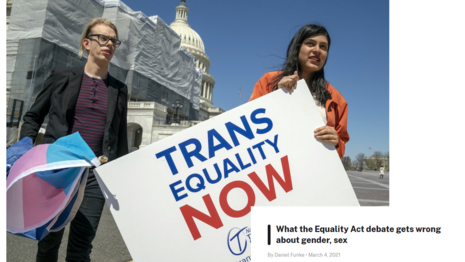 Much of the political debate has centered on gender identity — particularly Greene’s notion that there are “two genders.” However, public health agencies, doctors and biologists say science is clear: Gender identity goes beyond male and female.

“Sex is a biological term, gender is a social construct,” said Ignacio T. Moore, a biological sciences professor at Virginia Tech. “In other words, gender can vary with society and culture.”

The belief that there are only two genders is an oversimplification, “and what science really tells us is that it is more complicated,” said Dr. Jason Rafferty, a clinical assistant professor at Brown University.

It won’t surprise you that Professor Moore teaches a “Biology of Sex” course to correct “society” and “a general lack of scientific interest and understanding when it comes to sex and gender. He plays “devil’s advocate” with students who haven’t stretched their minds on the gender spectrum. They discuss controversies like transgender women competing with biological women in sports, so “the students are better informed, so when they become voting members of society, they can make informed decisions.”

Sound like an objective expert? No. There’s no sign that Funke and Valverde ever sought a conservative counterpoint on this story loaded up with liberals.

PolitiFact stresses that a tiny minority of people are “intersex.”

Estimates for the proportion of babies who are born intersex range from 0.018% to 1.7%, depending on how intersex is defined.

Nature provides variations in sex and humans decide how to categorize them, said Alice Dreger, a bioethicist who has researched differences of sex development. “Nature doesn’t tell us who counts as male, who counts as female and who counts as intersex — we draw those lines,” she said.

An objective expert? Alice Dreger donated repeatedly to Obama for President and other Democrats and wrote a book called Galileo’s Middle Finger. Heretics, Activists, and the Search for Justice in Science. A reviewer explained: “For two decades, historian Alice Dreger has led a life of extraordinary engagement, combining activist service to victims of unethical medical research with defense of scientists whose work has outraged identity politics activists.”

The article ends not on the facts, but about how “experts” worry about LGBTQ people at the hands of narrow-minded two-gender believers:

“The big thing to remember is that it’s not just politics,” Rafferty said. “These are people’s lives.”

Common sense understanding of gender causes “adverse health outcomes,” so embrace gender fluidity if you have any compassion. That’s the “fact checking” message?