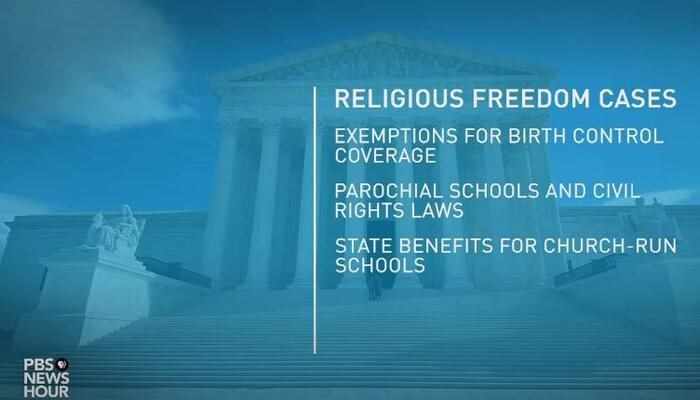 Unsurprisingly, the underlying story was far less celebratory than that jaunty headline might imply.

After leading with a quote about religious liberty from Justice Samuel Alito, Liptak began airing his grievances as if to suggest a conspiracy:

Those quarters do not include the Supreme Court, which has become far more likely to rule in favor of religious rights in recent years, according to a new study that considered 70 years of data.

The study, to be published in The Supreme Court Review, documented a 35-percentage-point increase in the rate of rulings in favor of religion in orally argued cases, culminating in an 81 percent success rate in the court led by Chief Justice John G. Roberts Jr.

This will not come as a shock to NewsBusters readers, but just three years ago, Liptak similarly pounced on Justice Elena Kagan’s concerns about the hazards of “weaponizing the First Amendment.”

The study found that “[t]he five most pro-religion justices all sit on the current court”:

In the last term alone, the court sided with Christian religious groups in three argued cases. The court ruled that state programs supporting private schools must include religious ones, that the Trump administration could allow employers with religious objections to deny contraception coverage to female workers and that employment discrimination laws do not apply to many teachers at religious schools.

Someone get Liptak some issues or a tinfoil hat. To suffice his concerns, Liptak’s sources were impeccably agreeable to liberal fear-mongering (click “expand”):

“The politicization of religious freedom has infiltrated every level of the federal judiciary,” [Stanford Constitutional Law Center’ Zalman] Rothschild wrote.

In the five years through the end of 2020, he wrote, federal judges’ partisan affiliations had become powerfully correlated to their votes. “And when the pandemic struck, resulting in widespread lockdowns of religious houses of worship,” he wrote, “the unprecedented number of constitutional free exercise cases brought in such a condensed span of time forced that partisanship into sharp relief.”

What changed in just the last five years? It is probably no coincidence that the court established a constitutional right to same-sex marriage in 2015.

More generally, claims of religious freedom, brought mostly by Christian groups, have increasingly been used to try to limit progressive measures like the protection of transgender rights and access to contraception. On top of that, a culture war erupted about how best to address the coronavirus.

And for yet another predictably fact, it’s no secret that Times reporters have taken to making blanket claims that any conservative opposition to liberal overreach is a conservative attempt to launch a “culture war.”

Fast-forward to the end and Liptak snuck in the real bias with a call back to his reporting on Justice Kagan’s warnings of “weaponization:”

In 2018, Justice Elena Kagan accused the court’s conservative majority of “weaponizing the First Amendment,” of using its protection of free expression “to intervene in economic and regulatory policy.”

Professor Epstein said something similar was afoot in the court’s religion decisions. “Just as the majority has weaponized free speech in service of business and conservative interests,” she said, “it’s using the religion clauses to privilege mostly mainstream religious organizations.”

No matter how often we see it, it’s still exceedingly strange to read about the First Amendment, previously beloved by journalists, as a cynical threat to the progressive cause.