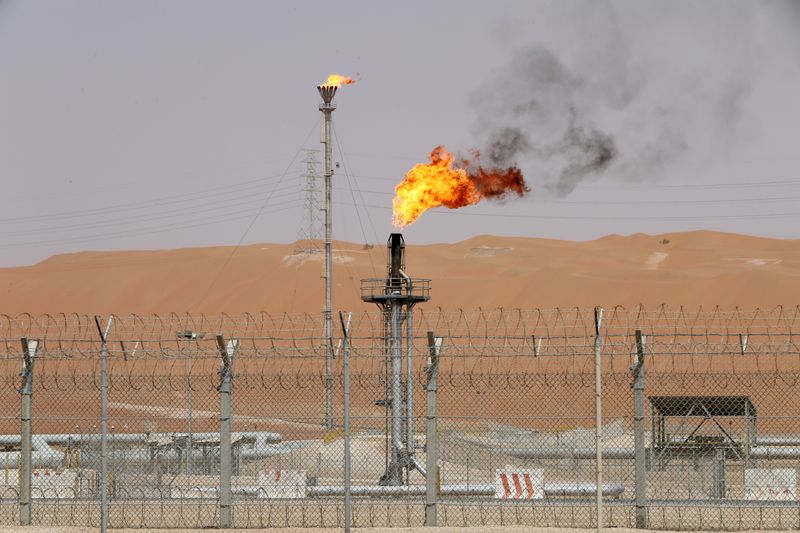 © Reuters. FILE PHOTO: Flames are seen at the production facility of Saudi Aramco’s Shaybah oilfield in the Empty Quarter

DUBAI (Reuters) – In order to wean Saudi Arabia off its dependency on crude the kingdom needs higher oil prices.

A multi-trillion dollar spending push designed to diversify the economy’s sources of income will require state companies to cut the dividends they pay the government to boost capital spending, Crown Prince Mohammed bin Salman has said.

It is not clear how much companies like oil group Saudi Aramco (SE:) – whose $75 billion dividends last year were vital to support state revenues – would cut their dividends, but any reduction would likely need to be compensated by higher oil prices, analysts say.

“If dividends are lowered, a higher oil price would boost Aramco transfers to the sovereign through taxes and royalties instead,” Jean-Michel Saliba, MENA economist at Bank of America (NYSE:), said in a research note.

This leaves crude revenues at the centre of the kingdom’s strategy targeting 27 trillion riyals ($7.2 trillion) in domestic spending by 2030.

The scale of the investment plan means OPEC leader Saudi Arabia may need to curb supply over the coming years to boost oil prices. This was already visible in early 2021 with the kingdom implementing unilateral production cuts and keeping output steady for April, said Monica Malik, chef economist at Abu Dhabi Commercial Bank.

“Saudi Arabia has managed to keep cohesion in the OPEC+ group so far, though there were some signs of greater internal and external pressure to raise group output from May,” she said. OPEC and its allies including Russia are known as OPEC+.

The fiscal benefits of higher oil prices can outweigh the impact on the economy of lower oil production.

A finance ministry spokesman said the kingdom and OPEC+ have immediate and longer term views on maintaining stable oil prices “for the benefit of all concerned”, and will continue to respond to global events and supply and demand issues in line with this objective.

While it is up to the companies participating in the new programme to decide how to fund their investments, the ministry anticipates a range of funding avenues, “of which dividends are one amongst many options including soft loans, debt and other financial instruments,” he said.

Hit hard by lower crude revenues and the coronavirus crisis last year, the Saudi government cut its budget by around 7% for 2021 to tame a deficit which nearly tripled last year to 12% of gross domestic product (GDP) from 4.5% of GDP in 2019.

This could put pressure on the treasury.

Ratings agency Fitch expects a fiscal deficit of about $40 billion this year, assuming an average oil price of $59 a barrel, average oil production of 8.7 million barrels a day, and total spending of 1 trillion riyals.

The government would need prices of $76 per barrel to have a balanced budget this year, but under the current dividend policy, and as production recovers, the breakeven price could come down to around $60 a barrel, said Krisjanis Krustins, director in Fitch’s sovereign team.

“So it seems clear to me that to meet those spending plans while accepting a reduction in the Aramco dividend, the government would need higher non-oil revenue, higher oil prices/production, or some adjustment to its target of fiscal balance by 2023,” he said.

Oil prices will stabilise around $63 per barrel this year, as vaccine rollouts support demand and OPEC+ continues to rein in supply, a Reuters poll showed last week.

S&P Global (NYSE:) Ratings analyst Ravi Bhatia said if the strategy leads to increased investment by large corporations in the economy, diversification and higher growth, this will in turn support fiscal revenues in the medium term.

“We are looking to work in partnership with the private sector through various means such as PPP (public private partnerships), privatisations and other means to transfer the capital expenditure more from the government over this period.”

Net FDI totalled $5.5 billion last year but the plan outlined by the crown prince sees FDI flows of over $500 billion in the next 10 years.

Even putting that aside, local investment targets will be tough to meet, said Bank of America’s Saliba.

“The bulk of the investment program appears to encompass the broader public sector (including the Public Investment Fund, Saudi Aramco and Sabic), but a funding gap remains.”

The PIF has said it is targeting annual investments of 150 billion riyals between 2021 and 2025.

“This suggests the PIF investments would need to double to reach the 3 trillion riyals level, a target that appears overly ambitious, in our view,” Saliba said.

The crown prince said PIF plans to offload some of its stakes in local firms and projects and Aramco, which listed in 2019, would sell more shares to bolster PIF’s coffers.

PIF, which did not respond to a comment request, funds itself through capital injections from the government, transfer of government assets, by retaining earnings from investments and with debt.